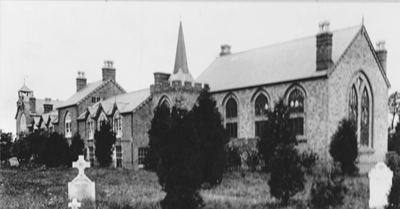 Schorne College was built in the 1870s on land adjacent to St. Mary´s Church, North Marston. The College was founded by Dr. Samuel James, vicar of the parish.The boys who boarded there were from affluent families from all over the country and abroad, the sons of aristocrats, clergy or senior military officers. They would arrive by train at Granborough Road railway station and then travel by horse-drawn trap to the college.
Two of Dr. James´ sons became vicars: St. John James became vicar of Oving and Pitchcott whilst Harold James followed his father as rector of North Marston. The other son, Samuel Frank Gerard (SFG) took over control of the College in 1893 having been the Mathematics Master there. SFG later became the chairman of the parish council. Dr. James was found drowned in the pond in the vicarage garden in 1909, the following year the College closed having played an important part in village life for 34 years.
The college was pulled down from the late 1920s by Edward Dudley, the village builder. He used much of the reclaimed material for building properties around the village. The site of the college is now the north side of the churchyard, across the road from the school. For a more detailed history of Schorne College read the chapter in The North Marston Story.